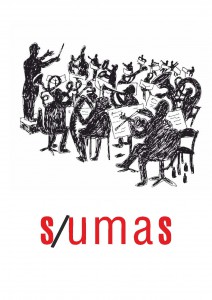 Students of the Art Academy in Split have formed the Ensemble for contemporary music S/UMAS last year, on the initiative of assistant professor Gordan Tudor, saxophone player and composer, who is also their artistic leader. That is just one among many ways Tudor acts continually on the field of education and promotion of contemporary music, not only in Split, but much wider. In this specific case his role is that of a motivator and a mentor and the main roles belong to the students. Their focus in on the 20th and 21st century music, but it is not limited in regards to style or genre, but it is rather adjusted to technical possibilities and need or desire to enjoy making music together with the intent to further develop performing skills and widening their poetic experience. One of the important goals of S/UMAS is working with live composers. That way the musicians gain precious experience that is unfortunately very often missing in study programs. That is why the Music Showroom of the Student Centre together with S/UMAS have commissioned a new piece by a young composer Ana Horvat for their concert at the Showroom. She will prepare the piece working together with the students in Split.

The Ensemble for contemporary music was created for the students and that is not my ensemble, but their ensemble. Gordan Tudor, artistic director